The meditation methods also call "Karmastana" which gives the meaning "transcending karma or ceasing cause which creates karma".  As long as we have desire, hatred & ignorance, the karma also creating and also powerful enough to give effects accordingly.

Once we get rid of desire, hatred & ignorance we finish the existence and as soon as we pass away from this life as an Arihat our existence also finish with our last breath.  That means we have no one to born again to get the effect from karma which we created for so long.  No cause, no effect! No effect, there is also no reason to burn!

So basically Karma has this kind of simple meaning.  It can be explain further with more details.  But for basic knowledge karma express this meaning.  Karma is the foundation; Karma gets the first place to gives various effects on our life. 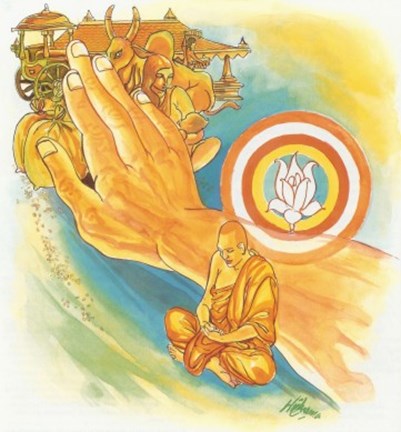 In another way previous karma is mainly responsible for everything happen to our life!  There may be other reasons which energize & accelerate the effect.  But the main responsible part is always the Karma.  If I explain further a bit, when one follows the path of letting go, that person has an environment which the effect of karma doesn't harmful enough to trouble him / her.

Imagine a person who is practicing letting go and to be no one.  He / she don't have a mind which believes in fighting for something he thinks valuable or fruitful.  Imagine another person comes for a fight for something valuable.  Then follower knows the truth on that so call valuable thing and he / she don't fight to own it with other person.

Then other person never hit him or fights with him and will leave the place with the things he / she want peacefully.  The follower already had lot of karma which possibly can cause him get hit or killed by someone else.  But he / she did not give the atmosphere to activate that kind of karma on this birth just because of the wisdom he / she got through Dhamma as a true follower.

That's how a person who is not entitling with 10 defilements has no atmosphere to get the evil effect of karma.

Next page
Karma at its best